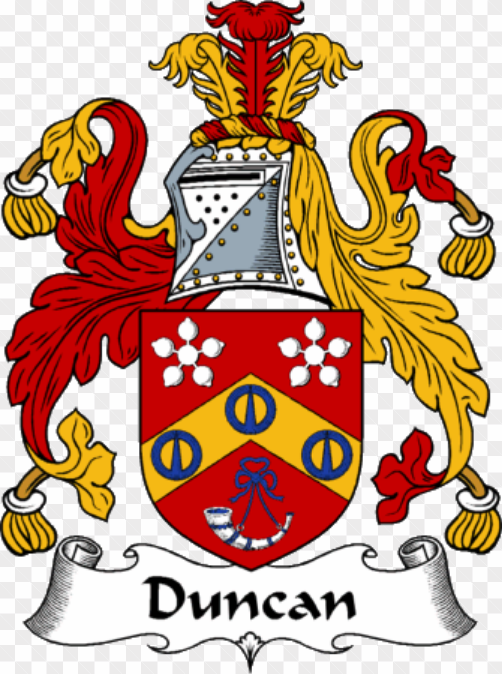 The name Duncan can be found in Scotland’s oldest records in its Gaelic form Dunchad/Donchadh and other spelling variants. (Dunchad) Duncan, which was originally a forename, is one of the oldest names in Scotland and can be dated back to the Celtic Scotii (Scots) from Ireland who colonized the Southwest of Scotland from about the 4th century AD.

There are other early accounts of the name include the being found on a 9 foot inscription on a ‘Turpillian Stone’ that dates back to the 4th century AD at Crickhowell, Wales, a particularly early mention of the name Duncan. Inscribed in Ogham (an early form of Celtic writing) the stone also carried the Latin translation “TURPILLI IC IACIT PUUERI TRILUNI DUNOCATI” which roughly translates as The Fort Warrior. Mention is also made of Dunchad (Duncan) the 11th Abbot of Iona, 707 – 717AD (later St. Dunchadh) and Dunchad (Duncan) the 39th Abbot in 989AD.

Detailed records from this time are few and so a full history of these clans is rare. The records for the Duncan clan became more detailed after Kenneth MacAlpine in 843 AD from the Scottish side of the family started to document and name cities based from family origins. One of the earliest references to the Duncan clan, is found in the margins of the 11th century ‘Book of Deer’ the oldest writings in Scots Gaelic known in Scotland today, these manuscript were written by the early Christian Monks of the Abbey of Deer in Aberdeenshire.

Duncan the I took the Scottish throne on 25th of November 1034 after his grandfather Malcolm as king died. Duncan the I was acknowledged by Malcolm to be his successor. Duncan would have been prudent to appease his remaining family, especially his older cousin Thorfinn the Mighty, Earl of Orkney; his uncle, MacBeth; and the person closest to his throne, Queen Gruoch, MacBeth’s wife. By 1040, however, Duncan had been murdered and the crown was in the hands of MacBeth. 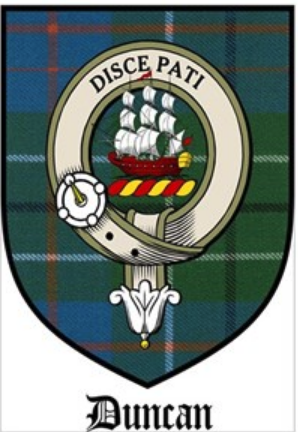 According to one account in history, a Clan Donnachaidh had emerged in the  early1300s from the Earls of Athole. The clan name is said to come from Donnachadh Reamhar -‘Stout Duncan’. Lore says that this chief led the clan into Battle at Bannockburn in 1314. Recent ancestral research suggests that this is unlikely. Duncan’s great-grandson was Robert, and from whom descends both the Duncans and the Robertsons, the predominant lineage of Duncans are from the of Scotland were the Duncan’s of Lundie in Forfarshire. Their widespread property included not only the barony of Lundie but also the estate of Gourdie.

In 1764, George III’s physician, Sir William Duncan was name a baronet. The title was not inherited. By 1795, Adam Duncan of Lundie had become Commander of the Fleet in the North Sea and Admiral of the Blue. Creating himself glorious career of victories, he was created 1st Viscount Duncan of Camperdown in 1797 and his son was made the Earl of Camperdown in 1831. The title became extinct in 1933 with the death of the Duchess of Buckingham.