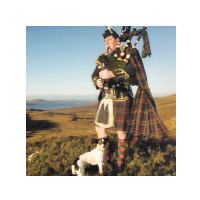 Major Bruce Hitchings, MBE BEM was born in Hunterville, New Zealand. He started playing the pipes at the age of nine. By the time he was sixteen he was playing with the
New Zealand Champions – The City of Wellington Pipe Band. Bruce visited Scotland in 1975 with the band, and the following year, came back to compete around the Highland
Games circuit for what he thought would be a couple of years.
Instead of returning home, Bruce joined the Black Watch Territorial Army as a Piper in 1977. In 1978 he enlisted as a regular into the Queen’s Own Highlanders. The following
year he won the Silver Medal for Piobaireachd at the Argyllshire Gathering. The Regiment always endeavored to have its top players compete at the Argyllshire Gathering in Oban and
the Northern Meetings at Inverness where Bruce won numerous prizes including second in the March and Strathspey/Reel in 1980. Bruce continued to compete successfully around the
Highland Games when his Army career permitted. He attended the Pipe Major’s course at Edinburgh Castle in 1980-81 receiving instruction from Captain Andrew Pitkeathly and
Pipe Major Angus MacDonald MBE and continued to receive on-going instruction from them until their deaths. In 1986 he became the Battalion Pipe Major, a position he held for six years and during this time was awarded the British Empire Medal (BEM). The last eight years of his military
career was spent in the post of WO1 Pipe Major, the Senior Pipe Major, British Army and Chief Instructor at The Army School of Piping, The Castle, Edinburgh. His main responsibility
during this period was teaching future Pipe Majors for the British Army and was rewarded with the Member of British Empire Medal (MBE) for services to Army piping in 2000.
On completion of his regular service, Bruce was commissioned into the Territorial Army with responsibility for the development of piping within the Reserve and Cadet Forces.
After a total of 33 years service, he finally resigned his commission (Major) in 2011, and continues to be held in highest esteem in military and piping circles.
Bruce set up the highly successful Highland Reeds company in 2000 and has developed new piping products with an aim to simplify the science of piping. His Balance Tone Drone Reeds and
range of moisture systems are popular with pipers the world over for both their simplicity and effectiveness. He continues to work on innovative products to make the life of the piper easier. Throughout his career Bruce played at many prestigious events for both the British Royalty and foreign dignitaries. He remains in demand as a piper through teaching and running schools and
workshops in the U.S., Germany, Austria and France on a regular basis. Bruce also judges internationally and many of the Scottish Senior competitions, including the Silver Medal at the
Northern Meetings 2013. He gives recitals in places as far afield as China, New Zealand and the USA.
In 2012 Bruce was appointed as a Board Member of the College of Piping and as a member of the Piping Committee for the Northern Meeting Piping Competition. He continues to be a
Senior Examiner for the Scottish Qualification Authority (SQA) / Pipe & Drums Qualifications Board (PDQB). Bruce has two sons, Seumas and Finlay who play in the pipe corps of the Ullapool & District Pipe Band which was voted Pipe Band of the Year at the MG Alba 2013 Traditional Music Awards.
When time allows away from piping, Bruce enjoys hill walking and is usually joined by his dog, Trigger. 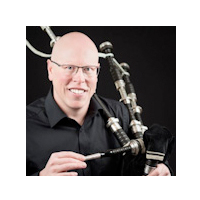 World champion piper Robert Watt from the small town of Maghera in Ireland has achieved many of the highest awards for solo piping and pipe band playing.
His diversity and talent represents Celtic music from the ancient Piobairechd to the modern day. As well as the Great Highland Bagpipe, Robert also plays a
range of Irish whistles and the bellows blown Lowland and Border Pipes. Some of his achievements for solo piping competitions and performances include the
prestigious Highland Society of London’s Silver Medal for Piobaireachd, a record seven times winner of the MacCrimmon Trophy at the world’s greatest Celtic Festival
in Lorient Brittany, several ‘All Ireland’ titles and many others throughout the USA, Europe, Australia, New Zealand, Africa and Asia. Robert has also played
for a number of years as part of the world famous Field Marshal Montgomery Pipe Band at the highest level in band competition. When not on the road performing and
teaching he enjoys living in Austria on ‘The Green Hill’s of Tyrol,’ where he finds much inspiration for many of his compositions. 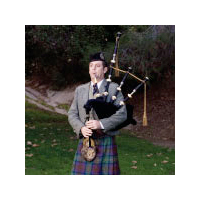 Aaron Shaw is known mostly as the piper with Wicked Tinkers. But Aaron has an extensive resume as a competitor, both in solo and band piping. Aaron started piping in 1976,
buying his first set of pipes in Scotland. He began attending the College of Piping Summer Schools in 1982, becoming an instructor there in 1996. He studied in Scotland with
P/M Angus MacDonald and Angus J. MacLellan.
Aaron has been a Piping Judge with WUSPBA since 2000 and, in addition to his private students, also teaches at the California Summer School of Piping and Drumming and
the Jim Thomson US School of Piping and Drumming and various seminars around the country. Aaron makes his living as a piper, performing at innumerable private events as
well as on TV and film. He’s also recorded with a wide range of other artists. 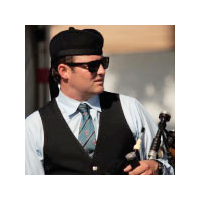 A native of San Diego, 34-year-old Colin Armstrong is the Pipe Major of the Grade 1 LA Scots Pipe band. The United States’ Premier Grade 1 Pipe Band. Colin was promoted to
Pipe Major in 2004 and under his direction the band has qualified for the Grade 1 World Championships Final in Glasgow Scotland on 3 occasions. At the age of 16, Colin was a
member of the LA Scots when it won the 1997 Grade 2 World Pipe Band Championships-the first band from the US to do so. Before playing with the LA Scots, Colin was a member of the
Prince Charles Junior Pipe Band of San Francisco. Colin is also a prominent solo competitor in the WUSPBA having won numerous solo prizes at home and abroad. Teaching bagpipes
professionally, Colin has students of all age and skill levels and regularly works with pipe bands in the Southern California area. He is also an accredited piping adjudicator
with the Western United States Pipe Band. Piping and its traditions are a family affair for Colin. Colin began his tuition with his uncle Pipe Major Scott MacDonald at the age of 10.
His grandfather Ian MacDonald was also founding member of the LA Scots. Colin’s mother Linda Armstrong is a world-class highland dance instructor and his sister Lindsey Armstrong
is also a prominent bagpiper in the Southern California area.
Music is a full-time job for Colin as he is also a professional singer, songwriter and performer with numerous compositions of his featured on network and cable television throughout the world. 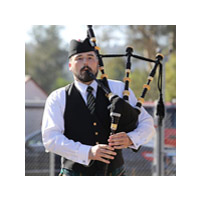 Andrew Hahn is a local boy, born and raised in a small town tucked away in the hills
of Northern San Diego County. He began piping at twelve, inspired by his father, Jeff,
learning to play a couple years prior. After a slow start, he launched his competitive career by
sweeping Grade 4 solos on his first outing, courtesy of instruction by Campbell Naismith. He
and his father both joined the House of Scotland Pipe Band around this time, whom they
played with at the World Pipe Band Championships in 2014. Andrew climbed the local
competitive ranks, making massive leaps in musical progress through attending the College
of Piping summer school programs (now the Robert McLintock School of Piping and
Drumming). Eventually he received national recognition as a young and upcoming piper and
was selected to compete at invitational contests such as the Balmoral and George Sherriff
Memorial competition on the east coast of the U.S and Canada. Andrew has performed with
groups such as the San Diego Symphony, the Chieftains (with the UC Riverside Pipe Band),
and even the Wicked Tinkers on occasion!
In 2015 he joined the Grade 2 Prince Charles Pipe Band out of San Francisco. In
2017, the band made their way to the Festival Interceltique de Lorient, then the World Pipe
Band Championships in 2018. These two experiences were instrumental in shaping Andrew’s
understanding of music, and propelled him toward where he is today. He now tutors the
House of Scotland and UCR Pipe Band and teaches a growing body of students. Andrew
receives ongoing instruction from Scott Ruscoe. 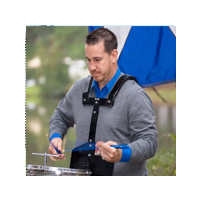 Ed Best began his drumming career in 1982 with his Dad’s Band in Grove City, PA where he competed in grade 4 until 1992. During which time he competed in the EUSPBA,
MWPBA, and the PPBSO, winning many band and drumming titles throughout the USA and Canada under D/S Mark Humphrey. Ed then moved to the North Coast Pipe Band as the
drum corporal, and competed in both grade 3 and grade 2 most notably, winning the North American Championships, the PPBSO Champion Supreme, and 4th Place at the World Championships.
In 1998 Ed then moved to California to play with the LA Scots Pipe Band under D/S Carl Lenny. During his tenure the band place 11th at the World Championships twice and even won the
drumming for the qualifying round. Ed then took over as D/S of the Misty Isle Organization where he developed a program and curriculum which took the band from grade 4 with only 2
snare drummers to a fully developed multi grade program with 16 snare drummers. 80% of these drummers were taught from scratch by Ed. The “A” band was promoted to grade 2, three
years after Ed joined the band.

Ed is a professional educator with a Bachelor’s Degree in Music Education, emphasis in percussion, from Edinboro University of Pennsylvania. He spent 10 years as a School
General Music Teacher and Band Director in all grades from Elementary through the University level.

In 2005 Ed became a pipe band adjudicator. He is very active at Highland Games throughout the United States. He is an “A” panel drumming and ensemble judge in the
WUSPBA and a drumming judge in the EUSPBA. He also serves on the Music Board of WUSPBA, where his primary functions are grading of bands and soloists and Adjudicator
training/education and certification. He recorded a DVD for adjudicator training, available to the general public here http://www.wuspba.org.

Ed is a regular instructor for bands and schools across the country. He provides instruction to the drummers, helps with music composition and arranging.
He also provides instruction in band ensemble. His individual students and bands regularly appear in the prize lists at highland games across the country. Ed understands
that everyone is different and has different strengths and goals. He works hard to be sure that your needs are met. He has experience teaching ages 4 through 80.
Click Here for More Info