Join us For the 3rd annual Scottish Heritage Celebration at the San Diego Padres!

Can I wear my kilt?

YES! 100%! Kilts, and any clan/tartan’d wear is HIGHLY encouraged.

Please note: pointed/sharp/bladed objects such as a Sgian-dubh or dirk, will NOT be allowed inside, so please leave those at home.

When is the game?

Be sure to join us at Mission Brewery from 11:30 am-12:30 pm for pregame entertainment!

Where is the game?

The game will be at Petco Park, downtown San Diego. You can use this map to navigate directions from where you live.

How much are tickets?

We have worked hard to secure the best prices for our followers. Tickets in our group section are $33.50, which includes the limited edition hat. If you choose to sit elsewhere, the prices will vary.

Are their discounts for seniors, youth, etc?

Unfortunately not. We do not control the pricing of Padre’s tickets. As such, we cannot offer any discounts.

When/how will I get my hat?

Hats are eligible to be collected on the day of the game for your ticket, only, and by the ticket holder.

You’ll take your ticket(s) to the designated table at the grassy social area at the back of the ballpark, called Gallagher Square (formerly Park at the Park), and they’ll be scanned by a Padres’ rep. You’ll then be given your hats(s).

What if I only want to buy the hat?

No problem! If you’re local, you can take your ticket and just go in, get your hat, and leave. If not, you could give your ticket to a friend or family member, who can attend and pick up your hat on your behalf. They can coordinate with you on how to get it to you.

If you really just want the hat, and don’t have any of those options, you can email us to collect your hat on your behalf. You would be donating your ticket to us, and we would arrange shipping to you.

I have closer seats; Can I still get the hat?

Unfortunately, the hat is only available to those who buy through the links on our website. You could buy a second ticket through our link, at the cheapest seat available on the same day you will be attending, and use that to qualify for the hat, and simply not sit in that seat.

What if I require handicapped accessibility?

The Padres have an allotted number of Wheelchair/ADA accessible seating in each section.

These are located across the front walk way, removed from the main seating section (so if you’re wanting to sit with your group, that won’t be possible). The ticket holder, and 1 companion may reserve these, on a first-come, first-serve basis.

What if I'm not ADA, but still have trouble with stairs etc?

There are a number of seats that have fewer rows, which may be good options for you. Within our designated section for Sunday’s game, we have specifically requested lower rows, spanning multiple sections, as to keep it as convenient as possible.

When/how do I get my tickets?

You will receive an order confirmation, and instructions from the Padres on how that works. Your ticket will most likely come in the form of an electronic ticket, unless you select otherwise.

Is there going to be pre-game entertainment again?

As we are not able to host entertainment at the Padres anymore, we have partnered with Mission Brewery, conveniently located just a block away!

They are offering our fans discounted $5 pints if you mention you are with San Diego Scottish Highland Games.

We will have Scottish Highland Dancers on site, as well as bagpipes!

Who are the Black Watch 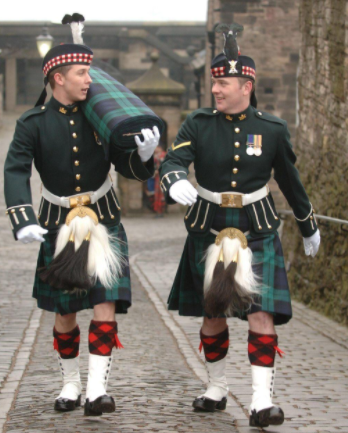 In 1725, following the Jacobite rebellion of 1715, General George Wade was authorised by George I to form six “watch” companies to patrol the Highlands of Scotland, three from Clan Campbell, one from Clan Fraser of Lovat, one from Clan Munro and one from Clan Grant. These were to be “employed in disarming the Highlanders, preventing depredations, bringing criminals to justice, and hindering rebels and attainted persons from inhabiting that part of the kingdom.” Francis Hindes Groome states in his Ordnance Gazetteer of Scotland (1901) that the watch was “embodied in a field [in Aberfeldy] in 1739”.[4] The force was known in Gaelic as Am Freiceadan Dubh, “the dark” or “black watch”.[5]

This epithet may have come from the uniform plaids of dark tartan with which the companies were provided. Other theories have been put forward; for instance, that the name referred to the “black hearts” of the pro-government militia who had sided with the “enemies of true Highland spirit”,[6] or that it came from their original duty in policing the Highlands, namely preventing “blackmail” (Highlanders demanding extortion payments to spare cattle herds).[7]