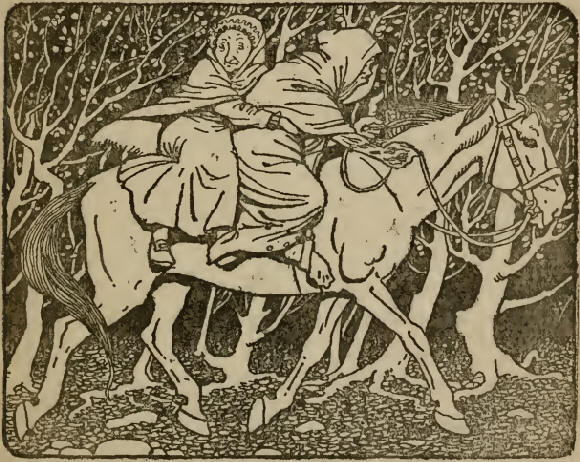 Long ago there was a farm known as Ferne Den. It took its name from the Den, or the Glen, filled with ferns that lay all around the farm. Anyone visiting the farm had to pass through the glen. And that was a problem, because in the glen there lived a brownie. And everyone knew – or thought they knew – that the brownie was dangerous. How? Well, no one was really sure. Apparently, he appeared only at night – a dark, shadow of a creature.

The farmer of Ferne Den and his wife did not fear the brownie. In fact, they considered him a great friend and their best farm hand. The farmer was getting older and less able to take care of all the tasks around the farm by himself. So he often left work half done around the farm or in the barn, and to his delight and satisfaction, in the morning the work was done and done well, too. As for the farmer’s wife, she counted on the brownie to help with the laundry and the cooking and the garden. The farmer and his wife had heard that brownies do not like to be paid for their work. In fact, they find it insulting. So they rewarded the brownie in the best way they knew. Every night before she went to bed, the farm wife left a bowl of fresh milk for the brownie. She made sure to use their nicest bowl and the freshest, tastiest milk, and she even added a bit of cream on the top. In the morning, the bowl was empty and the work was done.

However, even though the brownie never did anyone harm, and even though the farmer and his wife valued the brownie’s help, their servants and farm hands were still unaccountably afraid of the brownie. In fact, they often took a long, circuitous route from the town to the farm, simply to avoid going through the glen. They usually did this during the day, but they always took the long way home at night, when there was a greater danger of encountering the brownie.

One evening, the farmer’s wife took ill, and her condition got quickly worse and worse until the farmer was afraid she would soon die. He realized that the only hope for a cure lay with the old nurse who lived on the other side of the glen. The farmer was loath to leave his wife in her desperate state, so he asked for a servant to go and fetch the nurse. All the servants and farm hands had gathered in the farmhouse, so worried they were about the farmwife. She was kindness itself, and had always treated them more than fairly. She was generous and gentle, and all of them worried about her and dearly wished for her good health.

However, hearing that one of them must ride through the glen at night to fetch the nurse, they were almost paralyzed with fright. What if they would meet the fearsome brownie? No, each one said, the danger was too great. Perhaps they should wait until daylight.

In the meantime, the farmwife became sicker and sicker. And, unbeknownst to any of the people at the farmhouse, they were not the only ones who worried about the good woman. Outside and out of sight stood the brownie. He was worried as well, and he became angry when he heard everyone claim that they couldn’t and wouldn’t dare go through the glen at night. Wait until morning, would they? Not if the brownie could help it.

Calling them fools – and worse – the brownie determined to go for the nurse himself. But how could he accomplish this. He realized that the old nurse would surely be as afraid of him as the servants were, and she would never agree to go anywhere with him.

But he was desperate, and took desperate measures. He snatched the farmer’s long brown cloak from a hook by the door, and saddling the farmer’s fastest horse, he took off through the glen, urging the horse forward as fast as it could go. When he reached the nurse’s house, he rapped on the window, waking the old woman, who asked what was wanted. Trying his best to sound like the farmer, and pulling the hood of the cloak down past his nose, the brownie told the nurse that the farmwife was seriously ill and that her services were needed immediately. The old nurse awoke and agreed to help, but she asked where was the coach the farmer had sent for her. The brownie replied that there was no time for a coach, and he instructed the woman to ride behind him on the horse. In spite of her stiff joints, the nurse sensed the urgency of the situation and clambered up behind the brownie. Again, he urged the horse forward at such a speed that the nurse had to hold on for dear life.

When she saw that they were headed through the glen, the nurse called out in fear, “What if we should meet the brownie?” Now amused, the brownie, answered that he could guaranty that they would not be meeting anyone more dangerous that he was. This allayed the nurse’s fears and on they rode. She said, “I have nothing to fear at all then. For though I do not know you and have not even seen your face, I know you to be a good and kind soul, for your care and concern for the good farmwife.” They rode on in silence through the glen and into the farmyard. The brownie dismounted and went to lift the old woman down from the horse, but as he did so, the cloak slipped a bit, and the woman was startled to see the big ears and webbed feet of the brownie himself. She gasped and asked, “What sort of creature are you?” In reply, he said, “We have no time to discuss such nonsense. The good woman within needs your help immediately, and you must go to her now. But if anyone should ask, you can tell them that, since no one else would go for help, you came here in the company of none other than the brownie of Ferne Den.”